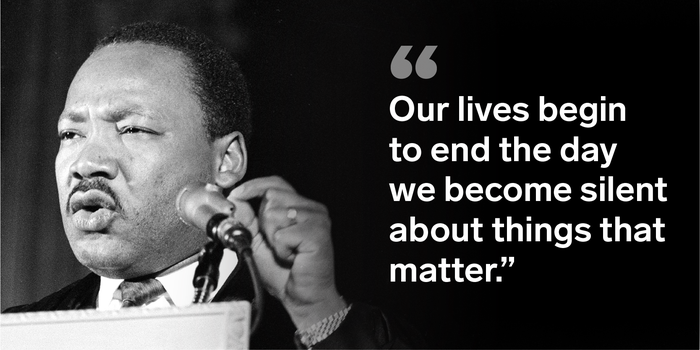 On the third Monday of every January since 1986, this day has been set aside as a day that work, schools, federal buildings, etc. are closed as a day off, it serves as the first federal holiday to honor and recognize the birth of the late Rev. Dr. Martin Luther King, Jr. It was an over 18 year struggle, after Congressman John Conyers first brought the motion to the congressional floor, a fight to have the country set aside to honor “The Drum Major for Justice”. So, every year we have the day off, but it should be a day on.

Dr. King is most remembered as an organizer and leader, who focused on resolving the inequities that Black people endured through non-violence and love, a magnificent orator, a brilliant writer, a persuasive negotiator, and so many other attributes. He was all these things, but he was also much more. He was a disruptor, an innovator, a visionary, a servant, an observer, a listener. He had a heart for the people and a heart for those who were considered “less than”. His fight to right the wrongs of inequality for people of color spilled over into fighting to dismantle the inequities of all poor people when he began to formulate that economic deprivation will continue to suffocate those living in poverty and the breath of living in true freedom would be out of reach. He contended that the injustice that spewed like a geyser to those who fell under the tent of being considered the minority was not only inhumane, but immoral.

The why that Dr. King gave his life for in 1968 is still the same why in 2021. The drive to create a more inclusive, diverse, and equitable country was put into gear by Dr. King and because of that drive, we can accelerate into that place that the Rev. Dr. Martin Luther King Jr. dreamed about on that day when he envisioned the possibility on that mountaintop.

To learn more about racial inequality in the business events industry and how you can be a better ally, please visit the IDE Resource Library. If you have any resources to share, or ideas for future webinars, please email Yolanda Simmons-Battle, CMP at yolanda.simmons-battle@ahima.org.